Text and other shapes are rendered using only their outlines without baking them into texture images, to support efficient animations, transformed drawing and display resolution independence.

This is a screenshot of the Kitchen example. If your browser supports WebAssembly and WebGL, run the example by pressing the run button. 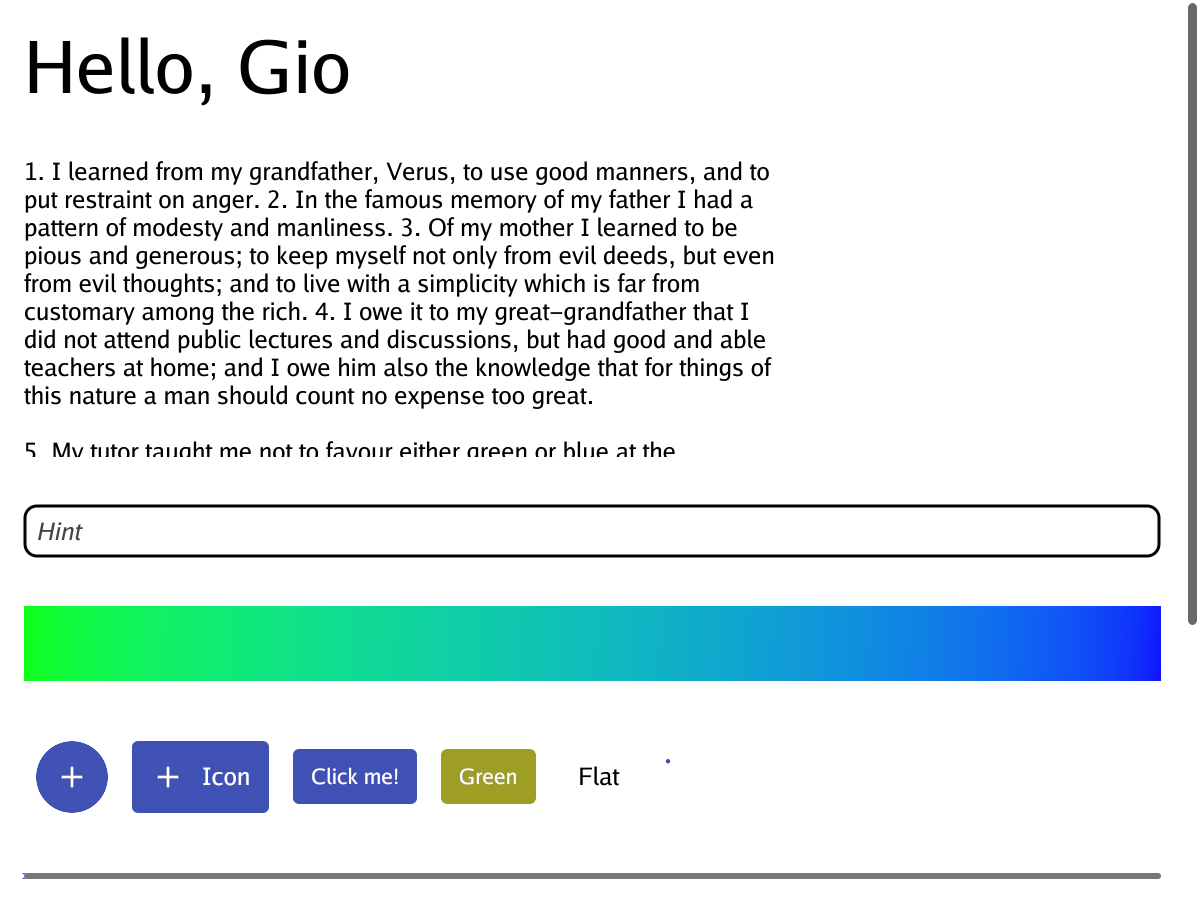 The architecture document is a good introduction to Gio concepts and API.

The examples give a feel of the structure of typical Gio programs.

Operations and stateful operation lists are the low-level primitives of Gio. The important operations are for drawing and clipping, as well as pointer and keyboard input.

Layouts, widgets and gestures are all implemented in terms of operations.

Package app is for creating windows and apply operations to them. Only the app package and its sub-packages have native dependencies, making Gio highly portable.

Gio is designed to work with very few dependencies. It depends only on the platform libraries for window management, input and GPU drawing.

Gio supports the latest released version of Go in module mode. Earlier versions of Go and GOPATH mode might work, but no effort is made to keep them working.

Use the go tool to initialize a new module and run the “hello” example:

should display a simple message in a window.

is another example that demonstrates the material design widgets.

For Android, iOS, tvOS the gogio tool can build and package a Gio program for you.

To build an Android .apk file from the kitchen example:

To build for the iOS simulator:

See the running on mobile page for more information.

To run a Gio program in a compatible browser, the gogio tool can output a directory ready to serve. With the goexec tool you don’t even need a web server:

Open http://localhost:8080 in a browser to run the program.

See the integration guide for details on using Gio with existing projects.

The source code, mailing lists and issue tracker for Gio are hosted on sourcehut. The examples are in the gio-example repository.

File bugs and TODOs through the issue tracker or send an email to ~eliasnaur/gio@todo.sr.ht. For general discussion, use the ~eliasnaur/gio@lists.sr.ht mailing list or the #gioui Gophers Slack workspace (Need an invite to gophers slack?.

You can also use the Sourcehut web-based flow for submitting patches, similar to other source forges. See the contribution guide for more details.

Development of Gio is funded by sponsorships. If you find Gio useful, please consider sponsoring the project on OpenCollective or one or more of its developers directly.